Pocket Park lies between the water treatment plant, the railway Line and Springhead Lane & meadow and is the closest part of Wildspace to the city centre. The area is well used because of the surfaced paths, play equipment, and short grass for games and picnics. The raised area next to the railway line gives good views over the washland and river to Stuntney. The area is also known as the Cresswells or Cresswells Pocket Park because it is situated on what were medieval watercress beds. These were sighted here because of the fresh water from a line of springs provided ideal conditions.

In more recent times it was the “Town Dump” which was capped, grassed and planted with a variety of trees, some native and others more exotic. It was then home to Ely City Hockey club for a number of years before the club moved to the astroturf at Ely Outdoor Sports Association off Downham Road. Ely Folk Festival was held there for a number of years before it too moved to Downham Road.

About ten years ago the Ely Society installed some of the benches around pocket Park and planted wildflower plants and seeds in a meadow area nearest to Springhead Lane. Unfortunately the rich soil means that plants like stinging nettles and the poisonous hemlock tend to dominate but over the years seasonal mowing by ECDC is gradually controlling these and allowing other plants to grow and flower. Insects including bumblebees and butterflies abound in the meadow area. The trees and bushes provide nest sites and food for a variety of small birds. 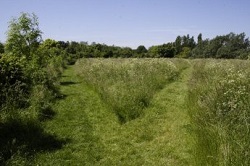 You can hear more about Ely’s Wild Spaces at Memories of Ely Pits and Meadows.